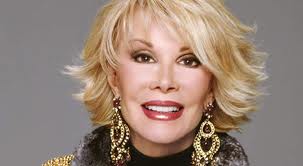 Joan Rivers philosophy of life must have been “inspire ‘till you die” because that is exactly what she did up to her last breath on Thursday September 4, 2014 of cardiac arrest.  Her untimely death at age 81 made me pause to reflect on the gift of life I still enjoy.  As I began to think about her incredible life, I realized that one tribute would not be enough for the impact of her diverse life; further, any essay I wrote would fit equally well in any one of my three blogs on this site.  So, I decided to write three different essays to celebrate her diverse and fully-lived life that surely put more into the many lives she touched than she took out.  The three essays are posted in my three blogs: “Life, Work and Meaning.”

Joan Rivers Inspired us in Many Ways

I am thinking that a new humanitarian award should be created in the name of Joan Rivers.  She inspired us by example to find our voice, to express it, and to create joy for others as well as ourselves; to get up and keep going when we are knocked down no matter how hard or how far we fell.  She also inspired us to “look marvelous” at all times, and would tell the world when we were not in no uncertain terms.  Above all, she taught us to look for humor in every situation, because when all is said and done, laughter maybe the only way guaranteed for us to enjoy the gift of life, with the possible exception of …,well, you fill in the joke for her.

Joan Rivers Inspired us as a Philosopher

Someone said that humor is philosophy twisted inside out. (I think I just made this up?)  Certainly, this thought has been around since humor spins on contradictory logic, according to the wonderful little book, Plato and a Platypus Walk into a Bar…, by Thomas Cathcart and Daniel Klein published in 2008.  They make the point that all humorists are practicing philosophers.  The Groucho Marx joke in my What Good is Philosophy post came from this book.  Joan Rivers is a member of this august group and, based on her body of work (or, would she say the “work on my body”?), should have a Nobel Prize for comedy (or, for “mybody”?).  If humor is philosophy dressed in funny clothes, we should be able to know why people laugh, right?  Here are several attempts to answer to this question.

Poets:  Why We Laugh?

Poets lay claim to the belief that they get the answer to major truths before others in society.  So I researched what E. B. White had to say on this question.   White was a prolific writer in all styles: poetry, adult books, children’s books, journalist reports, essays, magazine articles, advertising copy writer.  He was also a long time contributor to the New Yorker magazine before his death in 1985, and received the Presidential Medal of Freedom in 1963, America’s highest civilian award, as well as a Pulitzer Prize for his body of work in 1978.  He was somewhat of a recluse so I doubt he and Joan Rivers ever met.

He is most known as the co-author of The Elements of Style, by Strunk and White, a little book that sits within easy reach of writers.  Here is his answer to the “why” question:  dissecting why people laugh is like dissecting a frog; you will make a mess of it and the patient dies.  This is an amusing and clever non-answer response to the question, but poetry never claimed it solved practical problems.  The real issue is that this joke doesn’t “kill,” in the street vernacular of professional comedians; it not side-splittingly funny.

Benchmark:  Why We Laugh?

“Two hunters are out in the woods when one of them collapses. He doesn’t seem to be breathing and his eyes are glazed. The other guy whips out his phone and calls the emergency services. He gasps, ‘My friend is dead! What can I do?’ The operator says ‘Calm down. I can help. First let’s make sure he’s dead.’ There is a silence; then a shot is heard. Back on the phone, the guy says ‘OK, now what?’”

If you didn’t laugh, or only smiled a little, it is probably because you were reading this joke alone.  Humor turns out to be a social affair that is wired into our genes for various survival reasons that we guess at but don’t really know.  A live joke on TV by Joan Rivers that did “kill” an made the toughest customer in show business laugh.

Johnny Carson:  Why Joan Rivers Made him Laugh

Johnny Carson had opened the golden gate to big time comedy success for many comedians, including Joan Rivers, through appearances on his show.  The book on Johnny was if you could make him laugh, he invited you to sit by him for a few minutes where he would anoint you further if you continued to make him laugh even harder; no small task for a seasoned comedian like him that had seen and heard just about every joke.  He set up Rivers with this harmless rhetorical question: “Surely men are attracted to you for your intelligence, no?”  She quipped with lightning speed:  “Oh please!  A guy never puts his hand up a girls dress looking for a library card.”  Carson bent over and laughed until tears filled his eyes, and the house came down.  She killed in prime time and became an instant star.

Joan Rivers:  Why We Laugh?

Joan Rivers inspired us her whole life with this simple answer to the “Why” question:  “We laugh to calm our fear about everything.”  Laughter “kills” all right; it kills fear!  Thank you Joan Rivers, rest in peace.