Truths Evolve from Exchanges Between Distinctions 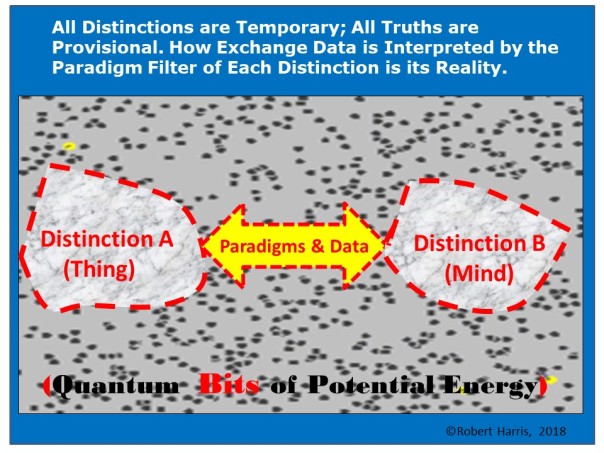 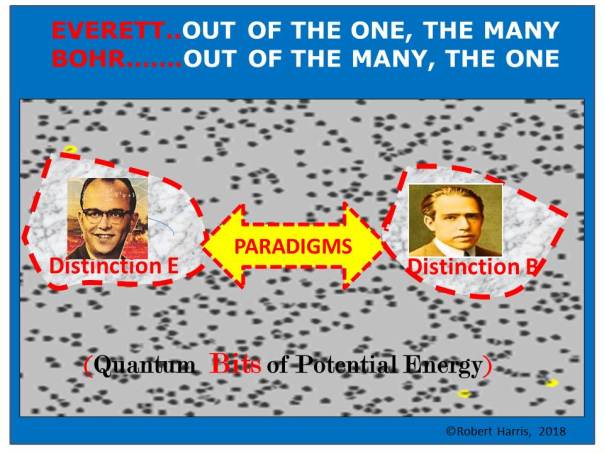 Truth is what we believe, for whatever reason or non-reason, based on our experience with other people and things, or “distinctions,” and what we learn from and about them to feed our desires.  I believe Truth is Knowledge. Truth evolves  because knowledge evolves.

We create abstract models of distinctions in our minds  to understand and manage  our relationships with them (culture as a market), but we may never know the core reality (nomenon) at the core of each phenomenon.   Instead we seem to live mostly in a binary world of polar opposites connected by a continuous spectrum that is a mixed shade of each binary pole at any point on this spectrum.

Our physical senses tell us all we know about PHYSICAL REALITY based on the extremes and their “in-betweens” of existence: Hot vs Cold. Sweet vs Sour. Black vs White. Loud vs Quiet.  Up vs Down. Near vs Far. Fast vs Slow. On vs Off. Live vs Dead. Yet we only sense a tiny sliver of what is going on in the universe because he have such a tiny natural bandwidth for receiving and processing information. Technology is rapidly expanding both our bandwidth and storage capacity for information with non-human devices, thereby, creating a new hybrid culture.

What is “love?”  How do you measure it? It is always relative and it is the one thing that moves us to act.  Work: We pursue what we love to do. Having done and enjoyed what we love, we want to do it all over again; that is, until we get tired of doing it because that love has faded. Why? The value of doing it has faded.  Does “love” equal “value” or quality on some scale? Philosopher Robert Pirsig thought so and wrote two books about it.

The desire for absolute truths in love or freedom is a weapon used by those who deceive. Mistrust and deception is going on at a high level in society right now. However, throughout history cultures have risen up to protect the continued evolution of truth and knowledge.  David Deutsch, father of quantum computing and a philosopher, spoke on cultural moral truth in a 2011 interview about his book, The Beginning of Infinity:

RESTRICTION (social word) is FRICTION (scientific word); they have the same meaning in many different contexts depending on where you are on the spectrum of freedom and control. As I said, too much of either and we die. The parent of both words is CONSTRAINT, perhaps the primary force that shapes all of our POSSIBLE REALITIES.

We are always looking for optimum balance, which only exists in motion (sailboat tacking).  Friction-LESS is how we are tending to connect with each other and things now at an exponential rate. If truth is knowledge, will we acquire enough knowledge fast enough, and broadly distributed in civilization enough, to manage the awesome  power of the FrictionLessSociety? This is a global security problem of the highest order.

The TRUTHS of REALITY, in all their self-similar fractal forms, seem to exist as a living and learning metaphorical “sticky marble of knowledge” that rolls like a pendulum between too much control and too much freedom picking up knowledge as it traces out a cork-screw path of evolution moving through time.

Can’t wait to see what’s next?